On June 29, 2001 a sad, skinny 3 month old Lab/mix puppy was presented  by his owners for not eating, vomiting and diarrhea. Bloody stool was seen on exam & lab test confirmed parvo virus. After deliberation, his owners took the young pup home for treatment. After 2 days the little guy was still not eating, but diarrhea and vomiting were controlled. The owners decided they could not continue treatment and were considering euthanasia. A staff member at the Valley Animal Hospital expressed interest in the young pup and after some discussion the owners relinquished ownership of the pup to the hospital.

Within 3 days the previously “down in the dumps” pup had become active, was eating and stools had returned to normal. The staff member who originally intended to adopt “Skeeter” had a change in location & could no longer take him home, so he was kept for potential adoption. Once over his parvo virus “Skeeter” rapidly grew into a strapping 65 pound young adult showing a great deal more Weimaraner than Labrador in his appearance. He also began showing signs of hip dysplasia which was confirmed with radiographs of the hips. Since this reduced Skeeter’s long term potential as a pet it was decided to keep “Skeeter” as a back-up blood donor and eventual replacement for “Burdawg” (see previous article). 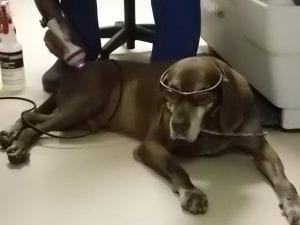 Burdawg & Skeeter were kept in large runs “across the aisle” from one another and developed an antagonistic relationship which led  to them attempting to fight when they were together. Great care had to be taken to walk them separately. As Burdawg aged Skeeter assumed the role of primary blood donor when blood typing proved him to be a “universal donor.” Over the next 9 years, Skeeter’s blood saved over a numerous other dogs lives when they needed transfusions. Burdawg’s death in 2012 had a profound affect on Skeeter as his “nemesis” of all those years was gone. A new young donor “Pistol Pete” quickly filled the void and perked up Skeeter again.

On April 18, 2013 Skeeter was noted to be lethargic, not eating, had swelled up under his jaw. Needle biopsies confirmed our fears. Skeeter had lymphoma (lymph node cancer). After much deliberation, it was decided we would place Skeeter in chemotherapy since the majority of his blood parameters were good and we felt we owed him a return on his years of service to the hospital. 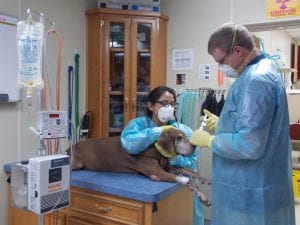 Treatment was initiated immediately with prednisone & chemotherapy scheduled. Chemo therapy through oncura partners group was initiated on May 2 2013. With a few negative post treatment episodes, Skeeter has handled his treatments well and is currently in remission. Time will tell on the overall success of the treatment. Between treatments Skeeter is enjoying retirement with good food, twice daily walks and weekly laser therapy on his hips.

Thank you Skeeter for your years of service and enjoyment you have given all of us.